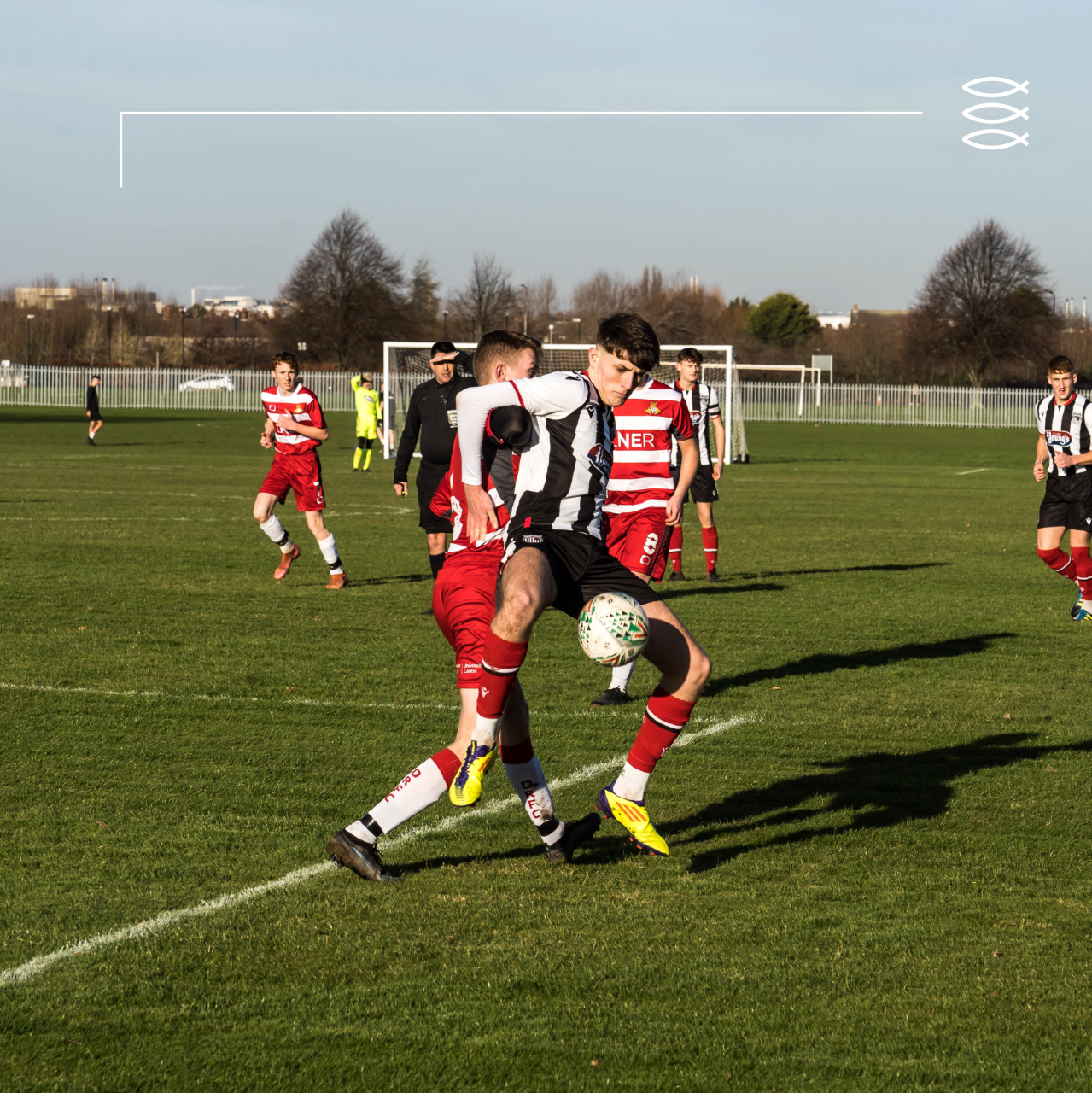 Having narrowly lost to The Reds in the reverse fixture (3-2) by a late winner back in November, the Mariners were looking for revenge to close the gap at the top of the table. The match started at a ferocious pace and the referee Terry Clapham was very busy awarding free kicks to both teams. Edwards had the only real chance in the opening stages dragging his 20-yard free kick just wide.

The game began to settle down around the 20-minute mark and Town won another free kick in a dangerous position right on the edge of the box after Kendall was dragged to the ground. Doncaster set up a 5 man wall and Edwards spotted Dunn without a marker on the edge of the box, his quick thinking allowed Dunn to ghost in and steer the ball into top corner to put GTFSS 1-0 up.

Minutes later and this time it was Grimsby who conceded a free kick around 25 yards out. Rio Allan, Rover’s top scorer, stepped up and rattled the cross bar with keeper Davies rooted. This was to be Doncaster’s only real chance of the game and from this point the young Mariners dominated proceedings. Kendall had the ball in the net but was judged to be offside before Woods’ header back across goal was just out of the reach of Etherington who couldn’t quite make clean contact and the ball rolled agonisingly wide.

On the half hour mark Town won another free kick in a dangerous position. Edwards again stood over the ball but this time he went for the direct route and curled the ball into the corner of the net to double Town’s lead. Kendall almost trebled Towns lead on 35 minutes but his shot flashed just past the far post and just beyond the late arriving Wootton. As the interval approached Dunn intercepted a ball out from the Doncaster defence and played it into striker Kendall. Kendall showed some good hold up played before laying the ball off the Edwards who raced into a 1v1 with keeper Nota. Edwards slid the ball passed Nota and in off the inside of the post to give Grimsby a 3-0 lead at the break.

After the interval Grimsby controlled the game with lots of possession.  Edwards went in search for his hat trick and 5 minutes into the second half he cut in from the left hand side but his effort just cleared the cross bar. Edwards then continued his 1v1 dual with Doncaster’s stopper Nota around the hour mark, he jinked in again from the left passed a couple of Rovers defenders but unfortunately the angle was against him and Nota was able to repel his shot with his feet. Town thought they had their fourth when Ethrington and Nota went up for a ball into the box, the ball ended up in the net but the ref gave a foul to the Rovers ‘keeper against Ethrington.

As the game ticked towards the closing stages a through ball by Edwards on 75 minutes saw Dunn racing in behind The Reds defence. Nota came rushing out the meet the ball and arrived at the same time as Dunn. In what looked a full hearted, but fair attempt from both players to gain the ball unfortunately lead to Nota picking up a bad ankle injury. With the keeper down for some time the official made the decision along with the Rovers staff to call an early halt to the game and award the 3-0 victory to Grimsby.

The Mariners U19 Shadows move up the table to second now just 1 point behind Doncaster Rovers but with a game in hand.