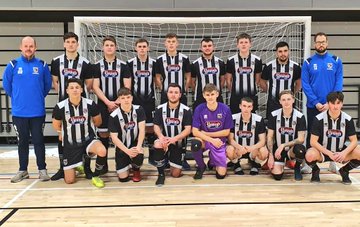 Grimsby Town FC Futsal made sure they were in the hat for round 2 of the FA Futsal Cup. After successfully getting through 3 qualifying games Grimsby faced League 1 side Washington Pumas from the North East in Round 1.

Town got off to a blistering start racing into a 4 goal lead inside 5 minutes. thanks to goals from Harding, De-Gruchy, Usher and an OG. The Mariners took their foot off the gas and allowed Pumas to pull 2 goals back to half the deficit. Coach Westerby called a time out and this instantly had the desired effect as Liam Hulse restored Town’s 3 goal margin. 5 became 7 before the break as Braithwaite and Tuplin sent GTFC into the interval 7-2 up. It could have been closer but Munday saved two 10 meter penalties late in the half as Grimsby had reached 6 on the foul count,

The second half was more of the same, Aldrich fired Grimsby 8-2 up, then a couple of bits of poor defending allowed first Braithwaite and then Taylor to get Town into double figures. Pumas then scored a consolation to make it 10-3 before Burrows scored and Boswell rounded off the goal tally to see it end 12-3 to the Mariners.

Town will find out their opponents later this week and the Round 2 tie takes place on the 29th of March.

You can see all the goals below: